HOW COSMETICS ARE CAUSING ANIMAL CRUELTY ?

Make up products , cosmetics- No matter you like them or not they grab your attention with the blink of your eye. May be its because of the packaging or the brand, You just get attracted by them. People are getting obsessed with cosmetics. Weather you are a consumer of beauty products or an animal lover you need to know about how cosmetics are causing animal cruelty.

So without making more delay let’s just dive into the post.

As for the cosmetic, make up and beauty products the innocent animals suffer from non-ending torture. You won’t believe that, each year more that 100 million animals die in US labs for biology lessons, medical training, curiosity-driven experiments, chemical drug, food and for our lovable cosmetic testing. 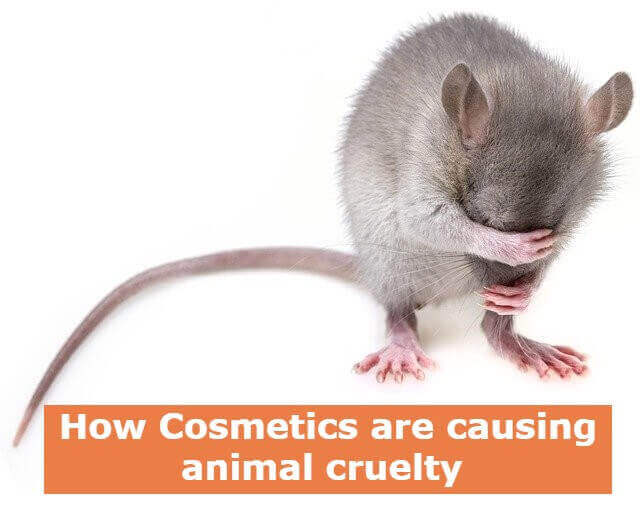 These experiments are tested upon animals including mice. rats, frogs, dogs, cats, rabbits, hamsters, guinea pigs, monkeys, fish and birds in the worst way. If you have a pet then you can feel the pain as i do ..

Have you ever wonder that “Why animal testing” ? We humans now able to create flesh on labs but still require animals to test upon. Isn’t it unnecessary. Let’s find out the answers.

Why we do test cosmetics products on animals ?

You have seen the dozen of chemical names printed behind the pack of your any cosmetic products. Though they were difficult to read but you must have seen them. They contain many harsh chemicals in it. But why don’t they affect you even though you use and apply them on your skin in daily basis ? Does this make any sense ?

You know why , cause they are already tested on thousands of animals before it was packed.

When a new cosmetic product is developed society deems it is not ethical to use that products first in human beings. This is essential because their is always a possibility that it would harm us or may have any health issues.

This is why many of the beauty product company and industry perform vulnerable experiments on the animals. This is why they ensure that their money making ingredients and so called Brands are safe to use by humans.

Do You know the worst part of the animal testing performed by these companies , they don’t ensure nay kind of treatment of the tested animals. I think it is not acceptable because for lack of treatments or for no treatments and medications the animals become handicapped and furtherly die.

Getting angry on those so called brands ? aren’t you ? Well, you have not reach on the top. They way they qualify their certifications  by animals cruelty will definitely make you furious .

How are cosmetics tested on animals ?

Animals like rabbits, guena pigs, rats, mice, digs, bunnies including monkeys are tested in laboratories for several months. These animals are forced to go through hard conditions which are even difficult to explain.

Do you know about “Draize test “? This test is considered as one  the most brutal test in animal testing. This experimentation is use to major irritation caused to the eyes or skin by the chemicals of the cosmetic product. The procedure  of this test is extremely unpleasant and so painful.

The association of hsi claimed that , the effects of draize test may include complete damage to the eyes causing eye reddening , swelling, ulceration or even blindness. On top what it also cause skin cracking and bleeding of the animal tissue. This is why draize test is so unreliable.

The cruelty doesn’t end with eye and skin irritation. The animals in laboratories are harmed weigh more painfully to get the accurate data about their product. To know if their brand is effective or not they perform force feeding to the animals.

Commonly, dozes of chemical substances are delivered to mice and other animals by repeated force feeding. This program are performed to learn weather their cosmetics are harmful or not. They conduct these test for weeks or months, so the researches and scientist can look for signs of general illness or specific health hazards. These test eventually cause diseases like cancer to the innocent animals.

Can you believed it ? We are feeding them chemicals instead of food for our own profit. What kind of success we get by doing it ?

The list of cruelty includes another dangerous animal testing which is widely called “lethal dose”. In my opinion this scientific experimentation should be stop .. Know why .

They don’t even spare the pregnant animals. Yes, you read it right !

The business of fashion (cosmetics) also concludes the testing on pregnant animals. This particulate test is applied upon rats. The pregnant rats are forced to feed the chemical substances without any safety and medications. This test last for about 21 days . After the test are done, the pregnant rat are killed along with their unborn babies with no pain relief.

This force feeding chemicals are also performed on pregnant rabbits. They conduct the experiment for about 21 days and after that pregnant are also killed along with their unborn babies. You must agree with me that these kind of experiments should be stooped for cosmetics and beauty products.

Guena pigs are required for the skin irritation test. In this skin irritation test the harmful chemicals are introduced to the shaved skin or more crucially into the cuts. They perform this to study weather the ingredients of cosmetic products would cause skin allergy or not. After they ensure that the product is okay to be used by the humans beings, the experimented pigs are also killed.

Who doesn’t love dogs. I do and if you love them too this information will make you heart broken. This types of experiments are also performed upon these happy animals. In the dogs experimentation method , dogs are forced to eat or inhale an ingredient used in the cosmetics. They even apply or rube the chemicals in cuts of shaved skin to study the output.

They do it in daily basis for 28 to 90 days. Now you can predict what they do after the experiments. Yes, you guessed it right !! the dogs are also killed.

So this is how cosmetics are tested on animals. Do you know the saddest part of animal testing. We the consumers indirectly support animal cruelty by buying their products from  the market instead of boycotting them.

But the question is, do we need animals to be experimented on ?

Is animal test pointless or not. Let’s jump into the post to find out the answer .

For me animal testing for cosmetics or any other any other product is both unnecessary and pointless. Just think , we are now able to send space crafts to the black holes but we still need animals to be test upon.

According cruelty free  international , animal testing is pretty pointless as animals don’t develop the same diseases as humans do. The DNA structure of animals and humans are very different. The evidence also shows that , as per cosmetic testing the potential reactions of animals could be completely unrelated to humans. The side effects of cosmetics can be so much different as comparison to the animals.

So, poisoning them and putting their lives in non tolerable danger is pretty worthless.

The humane society international (hsi) has stated that even though animals testing is not required by laws but companies still choose to use it.

Can you believe a country like France which is highly developed still choose animals for testing. It is both hilarious and heart ranching.

What Can be used Instead of Animal Testing :

We can’t and generally don’t buy the products which don’t have any certification. They can be harmful to us in many ways. This is why cosmetic companies think animals testing  should be permanent.

There are so many alternative of animal testing for cosmetics which are discussed below  let’s have a quick look into it.

1.Development of technologies has made the humans to reach beyond the imagination. Cell cultures is one of the best examples of our developed technology. Which is helping us to minimize animals testing. You know by the help of cell culture any type human and animal cells can be grown in the labs.

Through this method, Scientist have even managed to coax cells to grow into 3D structures. This has resulted for the growth of mini mature human organs in laboratory. this modern science technology will definitely help us to stop animals testing.

2.Animal cruelty can be stopped by testing on human tissues. I know this sounds weird, but it is not weird in real. In this process both healthy and diseased tissues are donated from human voluntaries. This type of campaign will definitely provide a more relevant way of studying human biology without harming the animal by testing them.

3. I think computer was the best thing which is created in the history of mankind. Can you believe that computer now can minimize the animals testing . A lot of computer models of heart, lungs, kidneys, skin, digestive system and musculoskeletal system are already their. This models can be used to conduct virtual experiments of cosmetics based on existing information and mathematical data.

This kinds of experiment can be helpful to eradicate the animals testing for cosmetics.

You know, apart from these, their are a lot of other alternatives of animals testing. They can so beneficial for us in many ways such as for the welfare of the animals, they have very less effects on environment and the experiments can be quick and get accurate data so frequently.

Which countries have banned animal testing for Cosmetics :

Countries like India, New Zealand, Israel, Norway, Brazil and south Korea have banned the use of animals for the test of cosmetic products. India had banned cosmetic testing on animals in 2014. After that Govt. of New Zealand had implemented the law to ban the animal testing for cosmetic for make up and beauty products.

You would love to know that , internationally, more than 40 countries have passed the law to limit or ban cosmetics  animal testing officially. These include every country of

Thankfully we are finally taking steps for future !

All the studies become worthless and go waste if you don’t know how to stop animal cruelty. Yes, we can be a part of cruelty free. All you have to do is go through the last part of this article which shows you the ideas to prevent animal cruelty.

What to Do To stop Cosmetics Testing On Animals ?

You know, the efforts we make today will shine tomorrow. The best thing about you is you want to stop it and you have the power as you are a consumer. So, try this steps and aware others to minimize the cosmetic testing on animals.

So, here we are at the end of this educational post. This article puts lite about how cosmetics are causing animal cruelty. Animal testing is performed for many important factors but cosmetics isn’t one of them, In my opinion.

People are getting confused in between the difference of necessity and luxury. This is not the way to live the life by hurting the innocent ones.

So, be educated and try not to become a part of animal cruelty at least for cosmetics. Thanks for reading.

👉7  benefits of a bonsai tree