THE HISTORY OF TAJ MAHAL

India is a country full of surprises, where you will be amazed more day by day. The more you go through the cultures, art and sculpture, charming natural places, reticular rituals, science and literature, music and dance ; the more you will get absolutely stunning sparkle in your heart and soul.
Despite all this things , the sculpture of many dynasties who ruled over India attracts the world eye towards it. Taj Mahal is such a mind-boggling mausoleum by the Mughal king Shah Jahan in India during the period of 1631 AD-1648AD.
The history of  the Taj Mahal describes ‘Taj Mahal’ as best known for the ‘symbol of love‘ by the majority of Indians as it was built by the order of the emperor Shah Jahan taking the period of 15 years of time to express his love for his beloved favorite queen Mumtaz Mahal.
There are many enchanting places in India but the fascinating beauty drown on white marble at the southern bank of river Yamuna by the great architect – Ustad Ahmad Lahauri, created a new page history to the architecture world; to the man made wonders of the world.
Taj Mahal is also known as ‘The Taj (crown among all the palaces)’ that reflects its glory and grace , perfection of the artists with all their life -skilled knowledge of geometrical patterns to endure best things like beautiful garden, brick-in-lime motar veneered with marble and red sand stone , reflecting water with fountains at their best place which they supposed to be.
Taj Mahal is a best worthy place where fantasies and fictions converted into facts, impossible imaginations turns into reality.

WHERE IS TAJ MAHAL IN INDIA ?

Taj Mahal being a wonderful place to visit, invites 6-7 million people through out every corners of the world. So many people search for “Where is Taj mahal in India ?” to their queries I can explain that , Taj Mahal was established in 1648 AD in the Indian city Agra, State of Utter Pradesh, India, on the southern banks of Yamuna river.
A famous fort called as “Agra Fort” or “Red Fort” also there on the right bank of river Yamuna to visit. You can also find the location of Taj Mahal on Google or maps of India.

ABOUT THE HISTORY OF TAJ MAHAL :

Being a splendid place to visit in India , Taj Mahal interacts with all its visitors invisibly and invites all to know about the history of Taj Mahal. Taj Mahal displays its various iconic moods with the shining sun and chilling cold moon.
It was made by the Mughal Emperor Shah Jahan for the glorification of his love for his favorite queen Mumtaz Mahal, who died in 17th June 1631 during her 14th child birth, Gauhar Ara Begum. Taj Mahal had been initially known as “ROZA-E-MUNAVVARA” which indicates a Unique Building of that time but later it was renamed as Taj Mahal by emperor Shah Jahan.
To remember his beloved wife, Shah Jahan made Taj Mahal which is the tomb of queen Mumtaz Mahal and afterwards Shah Jahan’s dead body also buried next to Mumtaz Mahal.
To built such an auspicious heritage , it took approximately 20 years of time duration and 42 acres (17 hectares) of area with the help of 20,000 skilled workers and 1,000 elephants to bring the heavy materials to the construction site. The workers were from India, Persia, Europe and Ottoman empire to built the spectacular Taj 404.

ABOUT THE STRUCTURE OF TAJ MAHAL :

The model plan of Taj Mahal is inspired by Indo-Islamic architecture and some particular portions of this sculpture bought from Arabic and Persian patterns. This monument has mostly 5 personal elements that holds it unitedly, such as ;
1.Main gateway
2.Garden
3.Mosque
4.Jawab (A building mirroring the mosque)
5.Mausoleum along with 4 minarets
The mosque and Jawab are facing east side and west side to give the mausoleum a perfect intentive balance. The red Sikri sandstone over the domes made of marble , exhibits the eminence of the mausoleum’s white marble at it’s best. 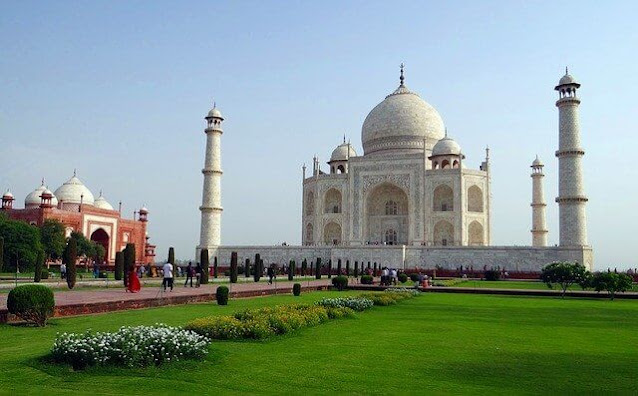 The Garden of the Taj also captivate the travelers with the water-courses (pools) nearby along with the spontaneous walking paths, fountains, and decorative trees.
You can find Arabic Calligraphy on the monument and various coloured (Lapis Lazuli, Jade, crystal, Amethyst, Turquoise) valuable stones in geometric and floral design on the hard stone, will serve you gleaming beauty on the Makrana Marble.
The gateway of Taj is known as Daybreak and welcomes all its visitors to enjoy the heaven around them. The ravishing vision of Taj Mahal will surely influence it’s guests to take break from all the materialistic things besides it and lost in its pleasantest grace.
The breath taking Taj Mahal will assuredly compel you to remind all the people related to it ; Shah Jahan, Mumtaz Mahal, The architects, The skilled workers, animals those help to built it and their soulful works , mindset, dedication, purity, love, and everything.
If you  drown in all these thoughts, you can fell their presence next to you.

WHAT IS THERE INSIDE THE TAJ MAHAL :

There is always a crave to know “What is there inside the Taj Mahal ?” As a symbol of love of Shah Jahan, both Mumtaz Mahal and Shah Jahan were buried here in an eight-sided chamber which was decorated with semi-precious stones and a marble lattice screen. But according to some historians, the coffin of the king and queen is in a quite room in the garden level.

WHAT HAPPENED TO SHAH JAHAN AFTER TAJ MAHAL MADE ?

Shah Jahan is regarded as the best Mughal emperor in India during whose legacy the people were lived in prosperity and a led a happy life. But after the Taj Mahal the unfortunate couldn’t spare him although he was great king.
After Taj Mahal  being made, some years Shah Jahan lamented Mumtaz but in 1657AD, he felt severely ill. During this period all his sons were fighting to become the next ruler but his third son, Aurangzeb won the throne.
He overthrew his Shah Jahan into prison in Agra Fort where Taj Mahal was slidely visible. Shah Jahan spent his old-age in prison until he died in January 1666.

Taj Mahal is the pride of India and one the 7 wonders of the world. That’s why many interesting stories and myths took place related to it. Some are :-
1.There are many people who believed that Shah Jahan dreamt to create the twin of Taj Mahal, but it would be in black form on the opposite bank of Yamuna river.
He also planned to connect them by a bridge. But unfortunately , it was not possible due to the scam his sons.
2.Some other people believed that Shah Jahan didn’t not want the Taj Mahal to be ever copied, so he ordered to cut off the hands of his all workers. So that they can’t create another Taj.
3.The minarets of the Taj Mahal are not perpendicular in size.
4.As Mumtaz died before the foundation of Taj Mahal it was not the first place where Mumtaz buried.
5.According to the geographical position and architectural design, the Taj can its colors in certain time period.
6.It was also believed that Taj Mahal was a Hindu temple.
Through all this description you can firmly imagine that how elegant the Taj Mahal is and delicate is the history of Taj Mahal. The Taj Mahal is the lively evidence of pure form of love of a emperor towards his queen. Though the history of Taj Mahal has shown you all the suffers behind this wonder but yet it is being known as a rich heritage in the eye of the world.
Post Views: 20