Mutual fear and distrust among the western powers and the USSR got manifested in the form of many several opposed policies and decisions over several international issues and problems.
In March 1946 British Prime Minister Churchill, in his famous Fultun  speech, strongly attacked the policies of USSR and the role of communist international. He also warned USSR not to spread the communism to different parts of the world like Iran, Greece and Turkey.

In March 1947,US President Truman announced a new doctrine in which he pledged full US support for “free people who were resisting attempted subjection by armed minorities and outside pressures”.
But somewhere its real purpose was to announce the decision that the USA will provide all help to such a state as were resisting the Soviet pressures. It was just an attempt of America to check the possibilities of growing Soviet power in international relations.

A little later, The USA formulated and announced the European Recovery Programmer-The Marshall plan for helping the socio-economies reconstruction of Europe. In reality, it was also an attempt to win over the states of western Europe and to keep them away from communisms and Soviet advances. Technically, Marshall plan aid was for all European states.

The USSR reacted strongly against the Truman Doctrine and the Marshall plan. These were seen as US attempts at establishing its power in international relations, as well as for isolating the USSR.As counter move, The USSR decided to boycott Marshall plan as well as to strengthen the unity of Eastern European states which had adopted socialist system. Against Marshall plan, The USSR established the council mutual economic comecon for helping the  economic consolidation of socialist states.
Cominform was established for coordinating the policies of communist parties of socialist states of the world. Truman Doctrine -Marshall plan VS comecon- cominform signaled the emergence of cold war in international relations.
After two preparatory years (1945-1947)a full scale cold war came to characteristic the relation of the USA and The USSR, which a little later got developed into the cold war between the USSR Bloc and the Soviet Bloc.

1.Germany as the center of Cold War :

In respect of Germany The USSR came to adopt a policy which was strongly opposed by the Western powers. The division of Germany into Federal Republic of the Germany (Pro West) and German Democratic Republic(Pro USSR) was affected in the process of attempts made by the USSR and the Western Powers to maintain their powers in their respective occupation zones.

In 1948 the Cold War got manifested in the form of Berlin Blockade. With a view to check Western Economic intervention in Berlin, The USSR decided to introduce its own economic reforms immediately. The USSR decided to apply the new East Zone currency and goods to Berlin. It enforced a blockade Of Berlin which produced a strong western reaction in the form of Berlin airlift.
This led to the development of a real crisis which produced a stalemate when the USSR refused to lift the blockade and the USA refused to abandon the airlift. The former insisted that the West should leave Berlin, and the later announced its determination to remain in Berlin until the Germany was reunited. Such opposed stands made all the conferences over Berlin a big failure. Berlin became a center of Cold War between the USSR and the USA.

3.Organisation of NATO and division of Germany :

The immediate fall ,out of such policies came in the form of the establishment of NATO on 4th April 1949 by the USA and her allies and the subsequent establishment of Federal Republic of Germany of 21st Sept.1949.The Soviet counter move came on 7th Oct.1949,when Soviet occupation zone in East German was declared to be the state German Democratic Republic. It was followed up by the USSR by organizing Warsaw Pact in 1955. 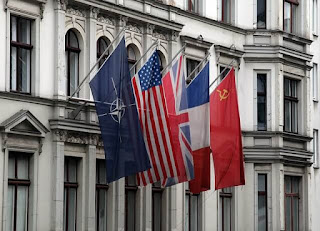 In 1949 the rise of Mao’s Communist Party to power in China gave big boost to Soviet influence in world politics and it produced a reaction in the form of the US commitment to follow the containment  of communism more vigorously. The USA then entered into a security treaty with Formosa China and declared it to be the real China. This was strongly opposed by the USSR and the Communist China.

In 1950, the Korean war provided the ground for the pursuance of cold war politics in Far East. The situation created by the North Korean aggression against South Korea provided the USA and Western powers and opportunity to attempt containment of communism by helping democratic south Korea against communist China, where as South Korea was supported by the U.S.A and other western countries.
American success  in making the U.N. Security Council agree upon the need to enforce collective security system in the Korean  War was strongly opposed by the Soviet Union. The differences between U.S.A. and USSR over the issue peace in Korea sharply divided the UN security Council and consequently ,it failed to for form its responsibility of preserving international peace and security against aggression.

6.Issue of Peace Treaty with Japan and Cold War :

The issue of peace treaty with Japan also demonstrated that both the U.S.A. and USSR were committed to pursue Cold War in their relations. The U.S decision to summon the San-Francisco conference in Sept.1951,for considering and approving the draft of peace treaty with Japan was strongly opposed by the USSR. However Soviet oppositions didn’t deter the U.S.A. to conclude the treaty.
It followed these up by concluding a defense treaty with Japan and thereby it got the right to station its troops in Japan. These treaty and the American treaty with Taiwan were obviously designed to put pressure on U.S.S.R AND China, and to arrest the spread of communism.

During 1953-63 the U.S.A. continued its policy of military and economic offensive. On the pattern of NATO, it organized the SEATO and MEDO these organization were meant to check the spread of communism into South East Asia, and the middle East.
As the counter action to such American moves the U.S.S.R. on 4th May 1955,was successful in organizing a communist defense pact-The Warsaw pact involving Eastern European socialist states. It was designed to “resist the attacks of the imperialists and capitalist.
“This led to the organization and consolidation of Soviet power or the socialist Bloc against the American power or the democratic Bloc. The international came to be vertically divided into two parts :the Soviet Bloc and the American Bloc, With Cold War in between. The development of such a bipolarity in international relations further increased the intensity of the Cold War.

Further the emergence of Nuclear armament race in between the U.S.A. and the U.S.S.R. followed by the space race further made the cold war more grave. The over kill capacity developed by each of the super powers created a highly dangerous situation in which talks for disarmament and Arms controlled were held but without success.

The Cold War made its appearance in Indo-China, Vietnam in particular, in early 1950s. By 1954,the war between the Ho Chin Minh forces and the French forces had reach a critical stage. Ho Chin Minh’s forces are backed by the USSR and Communist China, and France was strongly backed by the USA. France wanted to get rid of her involvement and therefore, advocated a pea careful solution.
Likewise the Soviet Union and the China wanted to avoid increasing the US involvement in Indo-China and hence expressed their willingness for a peaceful settlement of Indo-China problem. It was under the circumstances that the Geneva Agreement on Indo-China was affected in 1954.Vietnam got partitioned into North Vietnam under Communists and South Vietnam under the Democrats.
However within 24 hours of the signing of the Geneva Agreement, the war broke out between communists guerrillas and south Vietnamese forces. In order to check the communism the USA started giving huge aid to south Vietnam, and subsequently got directly involved in the Vietnam War.
After this development, the USSR and China started giving huge military  and economic aid to North Vietnam and thus the war in Indo-China got inseparably joined up with the cold war between the USA and the USSR.

In 1956,the Soviet intervention in Hungary was strongly opposed by the Western countries. But the former exhibited its ability to keep the iron curtain tight over the Eastern European states.

During the Suez canal War in 1956,the USA and USSR found themselves engaged in unintentional cooperation. The Anglo-French-Jewish invasion of Egypt for maintaining a forcible occupation of Suez canal area was strongly disliked by the USA, as it believed that it would force Egypt and other Muslim countries of Middle East to accept Soviet aid and be under Soviet influence. Hence the USA wanted an early end to this invasion.
Likewise, the  USSR ,found in the Suez Canal crisis an opportunity to increase its influence in the Middle East by siding with Egypt. It, therefore, gave a call for the end of the invasion of Egypt and followed this up immediately by holding out the threat to use atomic weapons in case Britain, France and Israel failed to abandon the Suez.
Thereupon Britain ,France and Israel agreed to accept the U.N. call for an immediate ceasefire, and thus ended the Suez War of 1956.

However ,in June 1957,Eisenhower principles ,under which the U.S. congress authorized the president to send the armed forces to any places for checking the danger of communism ,give a new intensity to the Cold War.
During the last two years of the tenure of U.S. president Eisenhower, heightened Cold War continued to characterize his relationship between U.S.A and U.S.S.R Germany, Berlin, Indo-China, Korea, Japan and middle East continued to be key centers of Cold War.

In 1957-58 ,Soviet premier Khrushchev came out openly in support of peaceful co-existence between East and West. He expressed strong desire to renounce war and to get engaged in peaceful cooperative international intercourse. He expressed his readiness to visit the USA and and meet president Eisenhower for sorting the U.S-Soviet differences.
This appeared as a welcome change , particularly when the USA decided to extend an invitation to Khrushchev. From 15 to 28 sept,1959,Soviet premier Khrushchev paid a visit to Washington and conducted meaningful talks with the president Eisenhower.
Khrushchev’s visit successfully made the international environment develop a healthy look. Further positive development came when an agreement was announced for holding a Four Power–(the USA, the USSR, the UK and France)–summit in Paris in June 1960.

Unfortunately, however, just a few days before the 4-power summit, the U-2 incident of 1 May,1960,took place and spoiled the entire environment that had been developing since 1957.U-2 was a US spy plane which was shot down by the Soviet forces.
The USSR felt greatly annoyed with the USA and wanted a US apology and assurance to end such spy missions over the Soviet Union. The USA was not prepared to accept the Soviet demand, and hence the U-2 incident once again made the US-USSR relations highly tense and strained.

The Paris Summit was held on 16th May,1960,under the shadow of the U-2 incident. Despite an earlier assurance that U-2 incident shall not be raised at the Paris Summit, Khrushchev demanded an American apology over the incident, and as a mark of protest refused to shake hands with the US president Eisenhower. Under the circumstances, the Paris Summit failed to reach any decision, and cold war continued to be the natural form of the US-USSR relations.
Post Views: 14