Malcolm X is better known as EL-Hajj El-Shabazz. He was an American Muslim minister and Human right activist and popular figure during the CIVIL RIGHT MOVEMENT. He is best known for his staunch and controversial Black racial advocacy and for his time spent as vocal spokesman for the Nation of ISLAM. Malcolm X ‘s real name is MALCOLM LITTLE. 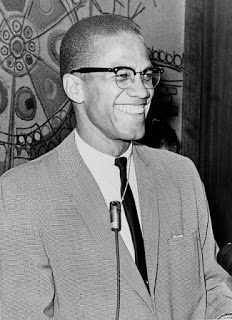 MALCOLM X AND HIS EARLY LIFE:

MALCOLM X was born on 19th May 1925,Omaha,Nebraska,United States. He spent his teenage years living in a series of foster homes after his father’s death. Rev. Earl Little was his father and he was a great leader. His father was a Baptist minister and strong devotee of the Black leader MARCUS GARVEY.
Malcolm’s father died in an accident. after his father’s death his mother got some mental disabilities and sent to a mental home. After losing both father and mother Malcolm and his siblings went in different fosters.

Unfortunately he could not got proper education in his Early life .Firstly he went to William High School(1939-1942).Then he went to west junior high school and then shifted to MASON HIGH SCHOOL. He always mention that he got “HOMEMADE” education.
In school life at 8th grade his teacher underestimated him saying that “he would not deserve to be lawyer, and Malcolm left the school.

HOW DID HE GET HIS NAME ?

After the death of his father and before the  age of 19 he was involved in many criminal activities like: Hustling, in prostitution, in drug dealing, and also in addiction with COCAINE seriously. Finally he sent to imprisonment at the age of 19 for 10 years. All this things at that time known as “DETROIT RED”.

HOW DID HE GET THIS NAME?

Malcolm X spent his childhood in fosters after the death of his father and was involved in Anti-social activities, and addiction of drugs. After imprisonment for 10 years in 1946  he need a proper direction for his life. In prison he joined the NOI or the nation of ISLAM and adopted this “X” name. In short period of time he became the most influencing leader being paroled in 1952.

WHAT IS “NOI” or NATION OF ISLAM ?

It is an African American Political and new religious movement. It was established in Detroit ,Michigan, United State. Founder of NOI  was Wallace Fard Muhammad on 4th July 1930.

WHAT IS MALCOLM X KNOWN FOR ?

Black supremacy or black supremacism is a racial belief that black people are superior to people of other races. This Black Supremacy term was advocated by Malcolm X and other term was taken by him was
1-BLACK EMPOWERMENT
2-SEPARATION OF BLACK AND WHITE AMERICAN
3-CIVIL RIGHTS MOVEMENT
Malcolm X expressed as America Nation’s pride by making it free from drugs, prescribed drugs and joined some of the Nation’s social welfare achievements. For example:-Drug rehabilitation program. In 1950s he was fixed officer of FBI.
Post Views: 3