Who did  give the title of “Mahatma” to M.K GANDHI?

The answer is Rabindranath Tagore gave the title of  “Mahatma” to M.K Gandhi. In Sanskrit Mahatma simply means that “Great Soul”.

When and where was Mahatma Gandhi born?

WHAT IS THE HISTORY OF MAHATMA GANDHI?

In South Africa Mahatma Gandhi faced many inhuman activities of British towards Indian out there. That made him to fight against it.

In South Africa, from the year of 1893-1914 Mahatma Gandhi worked as an attorney, a public worker and fight against of injustice and class division. Within 10 years Mahatma Gandhi propagated the philosophy of Satyagraha in South Africa.
Afterwards Gandhiji returned to India  in 1915 by the call of Gopal Krishna Gokhale. Gokhale insisted Gandhiji that he has been far away from his Nation. He wanted Gandhiji to come to India and know the situation of India under British rule.
WHY MAHATMA GANDHI IS FAMOUS ?
Mahatma Gandhi famous for his unique leadership with policy of non violence. He believed in the result of SATYA,DHARMA and KARMA of a man. He was also famous for such movements described below-:

The Kheda movement was held by Mahatma Gandhi in 1918 at Kheda located in the state of Gujrat. In 1918 due to famine the crop got fully destroyed .But the Britishers ordered to give the  tax. But at that time there was a rule that if the farmers got the corps less than 1/4 of the whole amount then the farmers are immune to give tax.

In first world war TURKEY was divided. Due to this the Muslim of India got hurt because the King of TURKEY was the “KHALIFA” or “PRECEPTOR” of the Muslims. Due to this the Muslims of India started a movement named as “KHILAFAT MOVEMENT” against Britishers. Ali Brothers MAULANA ABUL KALAM AZAD,HAKIM AJMAL KHAN were the members of Khilafat committee.
To unite and empower the Hindu and Muslims Mahatma Gandhi got involved in this movement. In November 1919 he became the leader of “KHILAFAT COMMITTEE“. After his permission Khilafat committee accepted the non violence movement idea. Both the Muslims and Hindu supported it. From officially, on 1st August 1920 the NON-COOPERATION movement started.

The government act 1919 and the Hunter committee made the movement more successful in some time the fire of non violence movement got spread all over the India. Due to the call of Mahatma Gandhi many famous persons such as Subhas Chandra Bose, Vallabhai patel, Chakravarti  Rajagopalachari, Jawaharlal Nehru got into corporation.

Civil  Disobedience Movement was an epic movement taken by Mahatma Gandhi. In 1927 Sir John Simon lead a commission to investigate the GOVT. Act 1919.There were seven people in this meeting but there was not even a single Indian in this commission in 1927 Indian congress committed to shun Simon commission.

There are many strike created by Indians. In 1928 October 30 at Lahore Lala Lajpat Rai got seriously injured while leading the procession which was against of Simon Commission. Due to this he died in 17th November 1928.

In 12th March 1930 Mahatma Gandhi officially started Civil disobedience movement .On this day he with his 78 congress followers started the march towards the place named Dandi which was 241 miles away from Sabarmati Ashram. 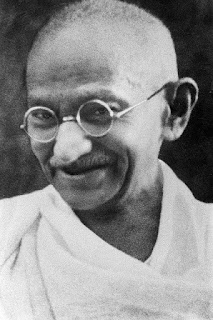 The main motive of Mahatma Gandhi was to disobedience the rule of taking salt. The walk from Sabarmati to Dandi is popularly known as “DANDI YATRA”.
On 6th April 1930 at the morning Mahatma Gandhi reached at Dandi and picked handful of sand to break the rule.

THE ROUND TABLE CONFERENCE:

On 5th March 1931 Gandhi Irwin pact was executed. After that he attained second Round table conference (7th Sept-1st Dec,1931) but,

it also got failed. The 3rd Round table conference(17th Nov-24th Dec,1932)also failed because no member of congress attained the conference.

Mahatma Gandhi launch the Quit India movement in August 1942.This movement was launched at the BOMBAY session. On 8th August 1942 ,during World war II ,demanding an end to British Raj and set a free INDIA.
Gandhi made a call to “DO OR DIE” in his quit India speech was delivered in BOMBAY. Due to the Mahatma Gandhi’s effort and support of the Indian people India finally got the freedom from BRITISH RAJ on 15th AUGUST 1947.