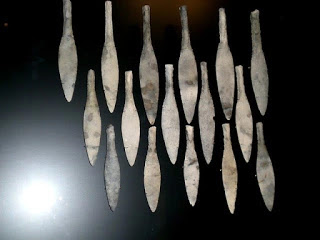 Mesolithic period  was the ancient cultural stage which existed between the PALEOLITHIC PERIOD(OLD STONE AGE), with its chipped stone tools and the NEOLITHIC PERIOD(NEW STONE AGE) with its sharply polished stone weapons that is about 2,60,000 to 11,700 years  old and had lasted for 2700 years.

Mesolithic  material culture is characterized be greater innovation and diversity that is found in the Paleolithic period. Among the new formed chipped stone tools were microliths, very small stone tools intended for maintaining together on a shaft to produce a serrated edge. Polished stone was another innovation that occurred in some Mesolithic assemblages.

some characteristics of Mesolithic period or middle stone age:-

1–Mesolithic period or the middle stone age is the proof of regional development in many parts of the world. Much of the archaeological evidence for the origin of modern human behavior is tracked back to sides in the southern Africa, including Blombos cave, Howiesons proof, still bay and pinnacle point.

2-Mesolithic culture represent a variety of hunting, fishing and food gathering techniques. This variety may be the result of adaptations to changed ecological conditions associated with the retreat of glaciers, the vast increase of forests in Europe and deserts in north Africa, and the vanish of the large game of the Ice age.

3-Microliths,the typical stone implements of the Mesolithic period, are smaller and more delicate than those of the late Paleolithic period. Pottery and the use of the bow developed, although their presence in Mesolithic cultures may only indicate contact with early Neolithic people.


4-As a proof of the Mesolithic period of time that hafted axes, an improvement one the Paleolithic hand axe, and bone tools are formed. 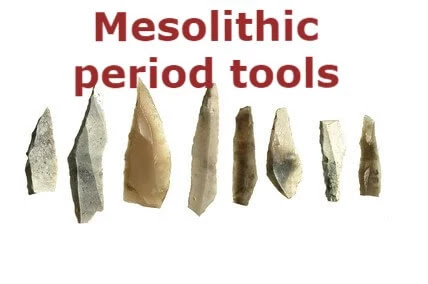 5-The Mesolithic period in other areas is represented by the Natufian in the middle East,the Badarian and Gerzean in Egypt, and the caspian in north Africa. The Natufian culture provides the earliest evidence of an evolution from a Mesolithic to a Neolithic way of life.

6-In Mesolithic period we can find evidence of ABSTRACT THINKING in the archaeological record as early as the Middle stone age transition, approximately 3,00,000-2,50,000 years ago.

7-The ability to plan and strategic, much like abstract thinking, can be seen in the more diversified toolkit of the Middle stone age, as well as in the subsistence patterns of the period.

8-The ability to expand into new environments throughout Africa and, ultimately, the world, displays a level of adaptability  and, consequently innovativeness that is often seen as characteristics of behavioral modernity.

9-In the Mesolithic period language has been suggested to be necessary to be maintain exchange networks. Evidence of some from of exchange networks during the middle stone age is presented in Marwick(2003) in which the distance between the source of raw material and location in which a stone artifact was found was compared throughout sites containing early stone artifacts.

This includes the oldest confirmed evidence for the utilization of ochre and marine resources in the form of shellfish exploitation for food. Best on his analysis of the MSA people were formidable hunters and their social behavior patterns approached those of modern humans.
Post Views: 28